Skip to content
Home » Food & Recipes » Foods That Start With 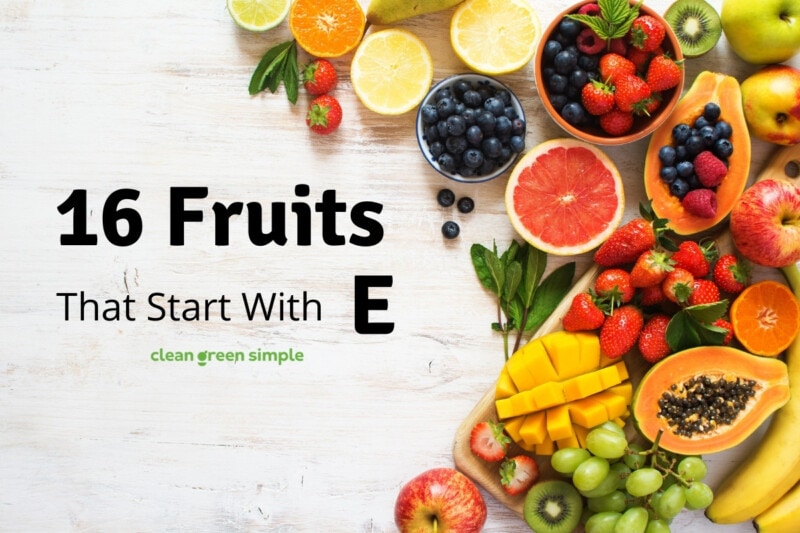 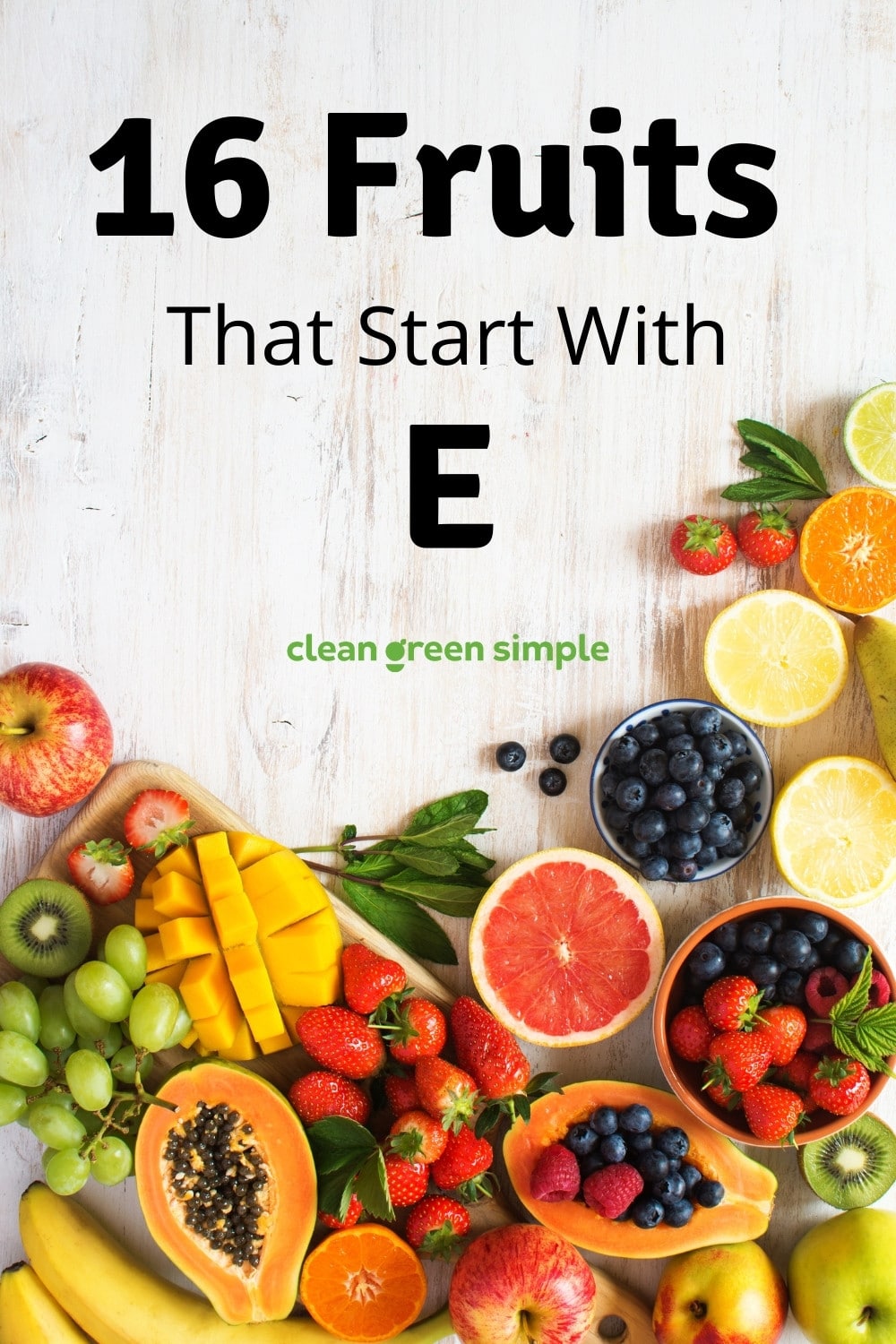 Think you’ve tasted all the fruit world has to offer? Think again.

Here are 16 fruits that start with E, including plenty of lesser-known produce and some rarer varieties of popular fruits. One thing they all have in common? They’re worth hunting down and giving a try.

Fruits that Start with the Letter E

Did you know that there are over 100 different varieties of mangoes? One of the most popular is the Early Gold mango, which was developed in Florida in the 1940s. Unlike traditional types, this tree fruits as early as May, adding two extra months to the Mango season in the States.

This variety is lighter yellow than your typical mango but shares that same, sweet, juicy flavor.

There are hundreds of different hawthorn species that grow around the world and many of them produce edible fruits, or haws. These bright red fruits, which are technically berries, resemble small crab apples.

Eastern hawthorns, or Crataegus aestivalis, are common throughout the Eastern US. Their tart berries are often made into “mayhaw” jelly, which is considered a local delicacy in many areas.

Egg fruits grow on canistel trees, which are native to Mexico and Central America but are now widely cultivated around the world. The fruits vary greatly by cultivator and can be round to oblong, and as large as 14 ounces.

All egg fruit types are bright yellow in color. The best varieties produce fruit with sweet, mousse-like flesh that tastes like egg custard and is most often eaten with a spoon.

The well-known eggplant is an old-world nightshade that typically produces an elongate, purple fruit. This plant is native to Asia where over 80% of eggplant cultivation still takes place today.

While often used as a vegetable in the kitchen, eggplants are actually a type of berry. Their spongy flesh absorbs flavors and sauces and makes them a great addition to stir frys, pasta, and curries.

This succulent perennial is closely related to the decorative succulent common to US gardens called an ice plant. Like many plants in the Aizoaceae family, elands sourfigs are native to southern Africa where their tiny fruits are foraged and used in jams.

The small, pebble-shaped fruit is covered in thick, salty, slime-filled leaves that must be removed. The fruit itself is quite sweet and can be eaten raw or added to preserves.

Elderberries have become a popular fruit thanks to their medicinal properties and high antioxidant and vitamin C content. Various species of the Sambucas genus can be found throughout the Northern Hemisphere and in Australia and some parts of South America.

The berries grow in large clusters and are dark purple to black. While a common ingredient in tea and medicinal syrups, raw elderberries are actually quite toxic, as are the leaves, branches, and roots of the trees.

Elephant apples are native to China and tropical Asia. While the fruits somewhat resemble a large green apple, this species of tropical evergreen is not at all related to the apple tree.

The large, round, lumpy fruits are quite sour and are used often in traditional Asian dishes and jams. They are also a favorite of Asian elephants, hence the name, and the collection and sale of wild fruits are often regulated to reduce food chain disruptions for local wildlife.

Emblica is a deciduous tree native to tropical Asia. It produces large clusters of round fruit about the size of a small plum that somewhat resemble green grapes. These hard fruits, also known as gooseberries, are used in many traditional Asian and Indian dishes including dal.

Additionally, these berries have a long medicinal history and are often sold in supplement form as “amla.” They have been shown to reduce inflammation, treat jaundice, and have antidiarrheal properties (1).

Emu apples, or Kunzea pomifera, are native to Australia, where Aboriginal people have consumed them for centuries. These small, round berries are greenish-yellow with areas of purple speckling. While they very much resemble traditional berries, their flavor is something like a spicy apple.

In addition to being a tasty raw snack, these little berries also pack an impressive antioxidant load–up to four times that of blueberries (2).

NOTE: The term “emu apple” is also commonly used to describe the fruits of Australian Owenia trees. These large apple-like fruits were also a favorite of the Aboriginals. Some species are known to cause hallucinations.

Not to be confused with the many types of emu fruit, emu berry is another E-fruit native to Australia. These little double to quadruple lobed drupes have many colorful names including dysentery bush and dog balls.

Emu berry fruits, which are quite small and rusty-brown when ripe, have a very sweet taste and are often used to flavor drinks. They also have medicinal properties and can be used to treat dysentery and soothe open wounds(3).

The entawak fruit is a distant relative of the better-known jackfruit and has a similar brown, spiky appearance. The trees are native to Malaysia, Sumatra, and Borneo where the fruit is eaten raw and the seeds roasted and salted for a tasty snack.

The orange flesh surrounds each of the many large seeds inside the hard shell and tastes somewhat like pumpkin.

Enterprise apples are a popular cultivator of the domestic apple. These deep red fruits are round with speckles of yellow or white. They were created and cultivated to be disease-resistant.

In addition to standing up to many common apple tree threats, the fruits are also highly storable and able to last up to 6 months in the fridge. Their tart flavor lessens somewhat after a month of storage, at which point they make great additions to many apple-based desserts.

Ephedra is a short, ground-dwelling plant with unique, twig-like leaves. These leaves are often cultivated for their ephedra alkaloids, which are known to increase metabolism, heart rate, and blood pressure. Supplements featuring ephedra were banned in the US after many deaths were tied to their use.

The small, bright red, lumpy fruits produced by these shrubs are edible and sweet. However, it was the twiggy leaves that were traditionally sought out by the native people of the Southern US to make medicinal teas.

Etrog is a type of citron closely related to the lemon and other types of citrus fruit. Its common name is yellow citron and the term etrog comes from its use in the Jewish ceremony of Sukkot.

This fruit resembles a withered lemon and has a lumpy, pale yellow rind. The flavor is very similar to that of a lemon’s but the flesh is much less juicy. It is often used to flavor drinks, desserts, or candied and eaten as a treat.

The European pear, or common pear, is the most popular type of pear cultivated in the US. There are many varieties of European pear, including Bartlett, d’Anjou, and bosc. They range in color from light yellow-green to purplish red.

European pears can be enjoyed fresh or baked into desserts.

Evergreen huckleberries are native to the west coast of the United States. These sweet berries, which are plump, round, and dark purple, were prized by the Native tribes in those areas. They were often eaten fresh and baked into breads or cakes for preservation.

Today, evergreen huckleberries are often wild foraged and used to make jams and added to baked goods. They have a flavor similar to blueberries, but more intense and sweeter.

More in Foods That Start With 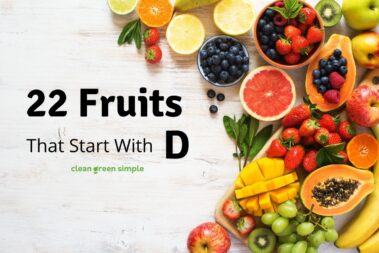 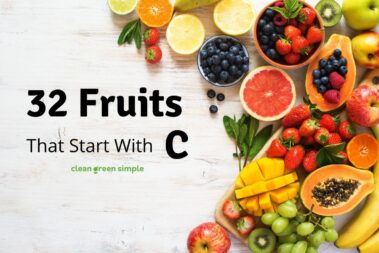 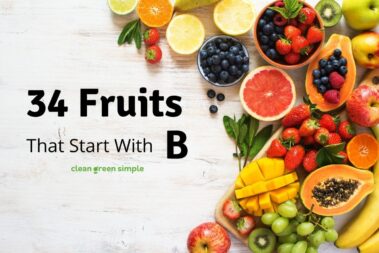 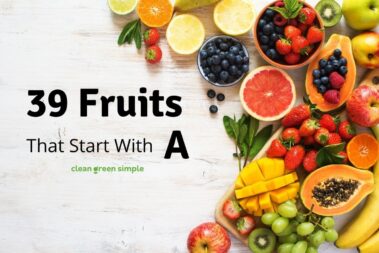