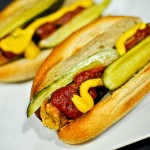 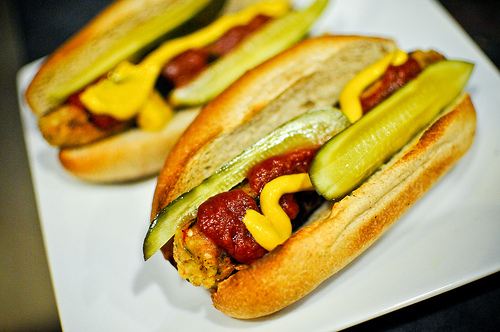 For the most part, I don’t miss eating meat very much at all – and I don’t eat any of the imitation meats (fake chicken nuggets, fake ground beef crumbles, etc.) because I can usually figure out a homemade solution that’s healthier and just as satisfying. The one exception to this rule was hot dogs/sausages. Every once in a while I just really crave a good sausage! (That’s what she said. Har har.)

I looked at the ingredient lists for a bunch of brands and found a couple that weren’t too terrible, so I’d splurge on them occasionally. Then one day my husband and I were at Whole Foods picking up a package of Field Roast sausages and this tiny lady comes up to us and says “Don’t buy that!” We, naturally, said “Uhm. Why?” and she says “Would you go home and wrap your food in plastic and then boil it in plastic and then eat it?”

“Well that’s what they do for all the veggie dogs, they wrap them in plastic and then boil them, that’s how they keep their shape!”

So we went home sausage-less and got to Googlin’. And darn it all, she was right! Sort of. Turns out that regular meat based sausages use part of the animal’s intestine to make the casing, but veggie dogs naturally don’t have that option so they have to use either cellulose or, ick, plastic. The sausages/hot dogs are shaped into these plastic or cellulose tubes and then boiled to pre-cook them so they keep their shape. Then they are either sold in that same plastic or the cellulose is removed and they are wrapped in plastic to be sold at the store. This is how regular ballpark hot dogs are made too, which really upsets that whole public image of hot dogs being made with really healthy and pure ingredients, right?

Anyway, this was a disappointing development. But the Dude Abides, so I decided to try to make my own. Which was harder than I thought because almost every recipe I could find called for vital wheat gluten, which in and of itself is fine, but my husband and I both tend to get a bit sick after we eat it (yes, we got sick from store bought veggie dogs, which are also usually gluten-based. This was another reason it was an occasional treat.)

Never one to back down from a challenge, I armed myself with every spice and ingredient I could think of and completely messed up my kitchen tinkering with various bases and seasoning mixes. 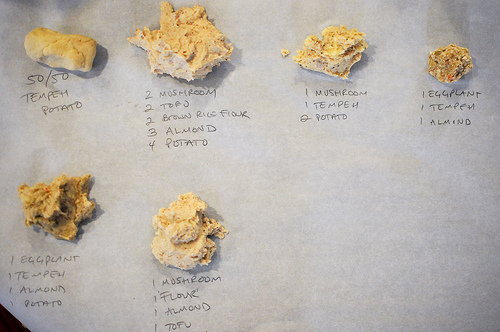 Four hours later, exhausted and covered in brown rice flour, I emerged victorious! Mostly. There’s probably a few tweaks that I’ll sort out over time with this recipe, and I’ll want to figure out other seasoning blends, but I think it does its job quite nicely. Its job being to sit in a bun, get covered with toppings, and taste and feel fairly sausage-y. You won’t be fooling any meat-eaters with this recipe, but I think it satisfies the sausage craving quite nicely and has no wheat or plastic in it!

You can fry these in a pan or on the grill (although I recommend using a bit of foil under them so they don’t fall apart) – I haven’t tried baking them but I bet that would work pretty well too.

If you want a sort of snappy “skin,” like a bratwurst or sausage has, I figured out a fun trick: bean curd or soy sheets! These are a little hard to find, but if you have a decent Asian market near you (I got mine at 99 Ranch if you’re in the Los Angeles area) you might be able to procure some. It’s just a thin sheet made of soy, it doesn’t really taste like much, but it adds a great texture and makes them a little easier to fry. 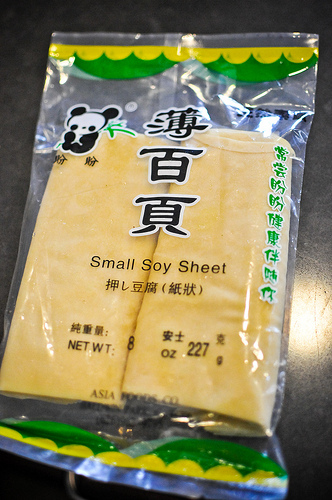 Once you’ve made your sausage “dough,” flour up your work surface with the leftover brown rice flour and roll about 1/3 cup of the sausage mix into a log. Lay one of the soy sheets down and make sure the log will fit the width of it. (My soy sheets were about 5″x5″ so this works for that – if yours are different shape you can probably figure out how to work with it based on this technique.)

Then lay the “sausage” across the soy sheet diagonally, cut off the corners (making sure there’s enough to wrap all the way around the sausage), brush a little bit of water onto the edge of the soy sheet to help it stick and wrap it up – check out the photos below for a more helpful demonstration: 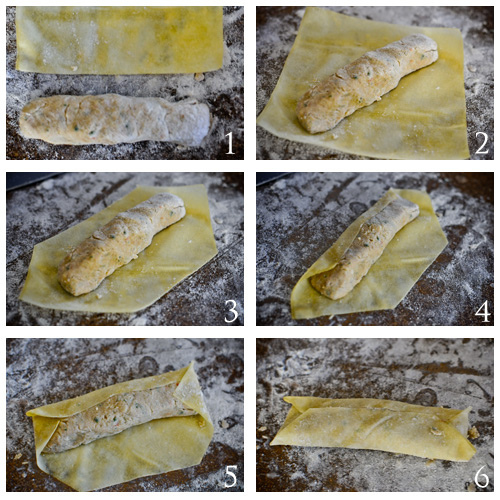 If you don’t have access to soy sheets or bean curd sheets, don’t sweat it – you can just form the mix into a hot dog shape and fry it up like a long skinny meatball. (The first photo in this post shows them without skins.) I went with a sort of apple sage seasoning, but if you want to experiment with your own I’d say that the “base” ingredients are the potato, carrot, tempeh, mushrooms, tofu, almonds and flour. You could try mixing those together and then adding herbs & spices to make it more italian, mexican, or whatever your favorite style of sausage is. I haven’t worked out how to get that generic regular hot dog flavor, but I’ll let you know if I do!

This recipe makes about 8 sausages, but since there’s a bunch of ingredients I recommend doubling or even tripling the recipe, shaping the sausages, and then freezing them before the frying step so you get more for the effort. One batch just fit into my 3 cup food processor so unless yours is a lot bigger you may want to use a blender or an immersion blender in a pot or bowl instead.

Fill a medium pot with water and bring to a boil. Add potatoes, carrots, and tempeh and boil until the potatoes and carrots are soft enough to mash, then drain and add to food processor. Meanwhile, add onion, bell pepper, celery and mushrooms to a large pan and heat until softened and the mushrooms have lost their moisture. Add these to the food processor. Then add all the remaining ingredients except the soy sheets to the food processor and blend until smooth and doughy in texture (you may have to stop and scrape down the sides a few times to get an even texture.) If it is too wet try adding a bit more brown rice flour.

Using about 1/3 cup of this mixture at a time, roll into sausage shaped logs and then wrap in bean curd as instructed above or just pan fry about 3-4 minutes per side until nicely browned. Serve in a bun (or gluten free bread/rolls if you’re completely avoiding gluten) and top with whatever you like! 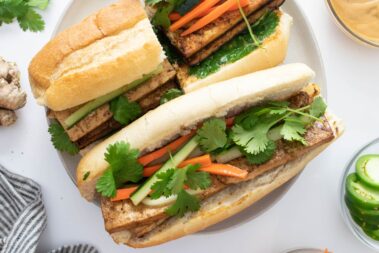 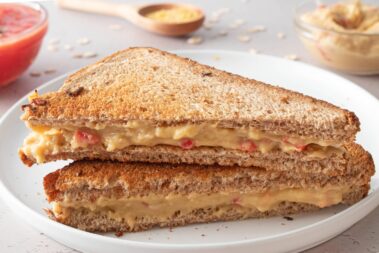 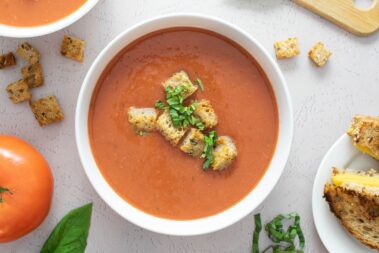