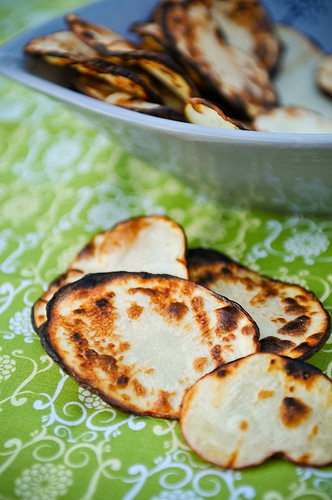 These aren’t quite thin enough to be called “chips” but their flavor is definitely reminiscent of salt and vinegar potato chips – just a bit heartier and more appropriate as a nice side dish (or a great snack!) If you have a mandolin they are pretty quick (even if you don’t, at least you don’t have to peel them!) I got the recipe from Martha Stewart and didn’t modify it very much aside from probably using a little less oil than they did.

Just scrub a couple of potatoes – you can use russets, red, fingerling, whatever you want, really – or even a mix is fun. Slice them about 1/8-1/4 inch thick (if you’re doing it by hand just go as thin as you can) and toss them in a medium pot. 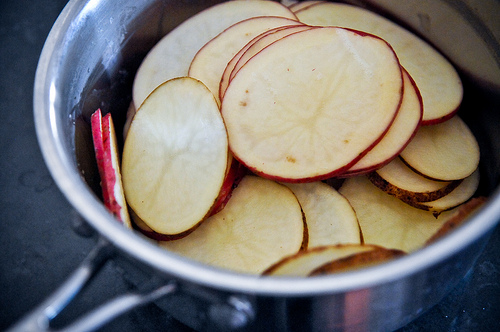 Fill until they are just covered with white vinegar. 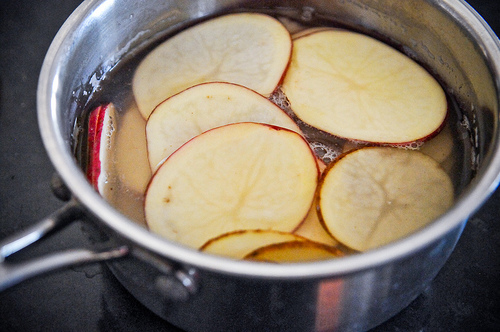 Bring to a boil and boil the potatoes for about 5 minutes, then remove from the heat and let sit for about 15-30 minutes or so. While they are sitting, preheat your grill to medium-high heat. Drain the potatoes and brush some olive oil on the grill so the potatoes won’t stick. Sprinkle them with salt (I recommend a more flakey kosher style salt for these) Heat them for about 5 minutes per side, until they are have some nice bubbles and grill marks. I found that I liked them better a little less charred, personally. 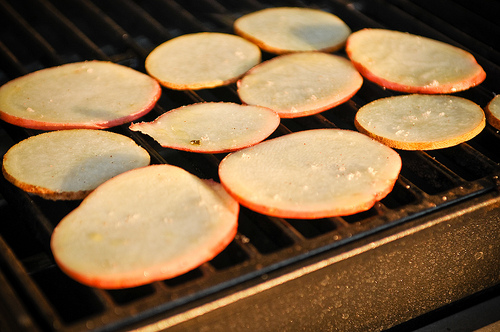 You could also roast these if you don’t have easy access to a grill – just grease a cookie sheet, spread them out in a single layer, sprinkle with salt and roast them at 450 for about 8-10 minutes per side or until browned and a bit crispy. 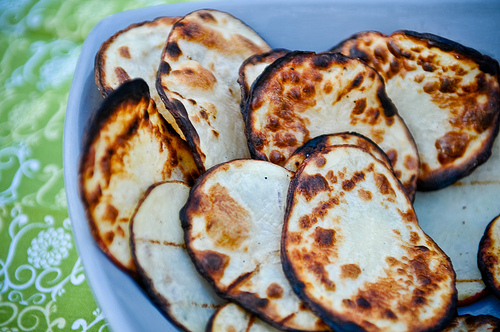 Serving size depends on the size of the potatoes you use and is easily customized.

Slice the potatoes about 1/4 inch thick (no need to peel) and place in a medium pot. Fill pot until potatoes are just covered with white vinegar. Bring to a boil and boil for about 5 minutes. Remove from heat and let sit for about 20 minutes. Preheat grill to medium-high heat (or oven to 450 degrees). Brush grill (or cookie sheet) with olive oil, place potatoes in a single layer, and sprinkle with salt. On grill, heat for about 5 minutes per side, until slightly charred. In oven, heat for about 10 minutes per side, until browned and crispy on the edges.