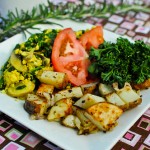 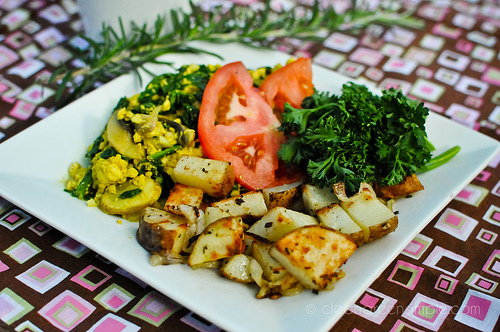 When eating out at typical restaurants, I’d say that breakfast is definitely the most difficult meal for vegans. It seems like half of the meals are or have eggs in them (omelettes, scrambled eggs, breakfast burritos…) and the other half have dairy (french toast, pancakes, smoothies, yogurt) If you also try to be gluten free then you’re really up a creek because the small amount of options you had left (toast, bagels) are now gone.

The point of which is not to complain, I really don’t find it to be that hard to eat out at restaurants in general, and even at breakfast I can usually find oatmeal or a fruit plate or something (or in the case of one memorable recent occasion, convince the waiter to cobble together various menu items into an awesome spinach, potato and veggie scramble. The other people at the table were jealous!) I really only bring it up to discuss how easy it is to create vegan versions of most things – it’s so fun to make delectable french toast, pancakes, and in today’s example, a surprisingly egg-like tofu scramble. 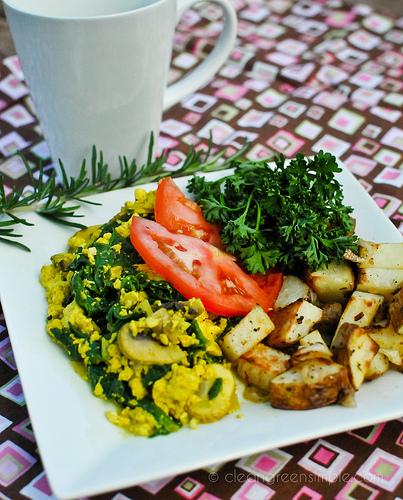 It’s also a one-skillet meal, which is always nice. Well, ok, if you make the roasted potatoes it’s a one-skillet-and-a-cookie-sheet meal. Still not too bad! You want to start the potatoes first to get it all timed out right. Just chop a couple of them up (you could peel them but I don’t bother) into 1-inch chunks. Slice up some onion and garlic, and a bit of fresh rosemary (you could also use dried but fresh is usually better) – toss it all with just a bit of olive oil and spread it on a cookie sheet and you’ll already be happy you decided to make this for breakfast. 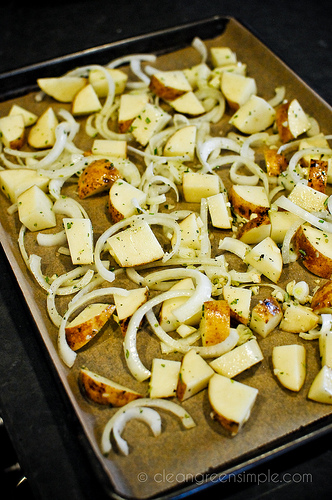 Stick that in the oven for 15 minutes at 400 degrees while you prep your scramble ingredients. Which probably won’t even take you 15 minutes, all you have to do is rinse off some spinach and a block of tofu and slice a few mushrooms and an onion (which you probably already did while you were chopping onion for the potatoes). 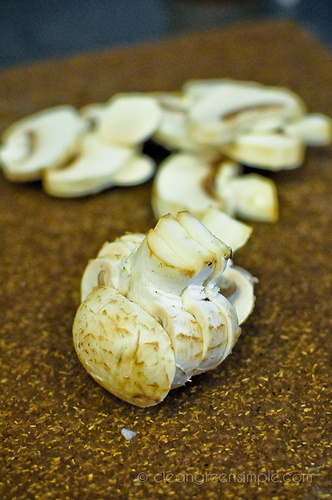 After the potatoes have roasted for 15 minutes, raise the oven temperature to 450, stir them around a bit, and let them cook for another 15 minutes. While they finish, you can make your scramble. Just get a nice big skillet (I used my 12″) and put your tofu, onions, mushrooms, and spinach in all at once. 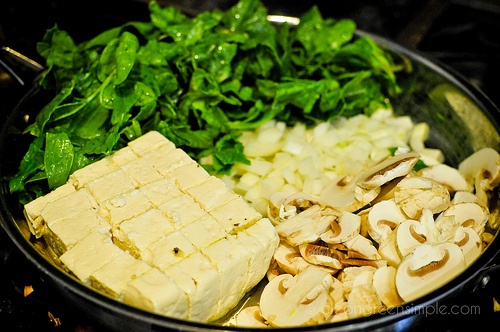 I’ll be honest with you, this makes for a pretty full skillet, so if you want to make life a little easier you can do the tofu by itself beforehand or in a different skillet. I just like to challenge myself. And make a mess, sometimes. Chop the tofu into blocks as shown above (I just use a spatula to do that right in the pan, it doesn’t have to be fancy) and sprinkle it with some salt, turmeric, cumin, and chili powder. Stir it up a bit to blend the spices in and give it that “scrambled” look. 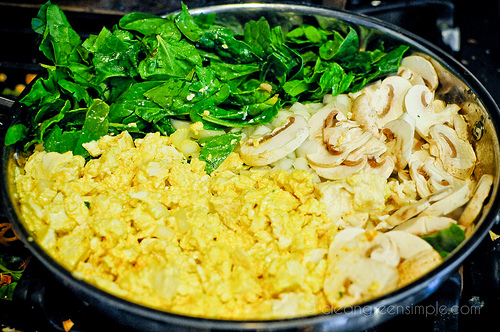 I love how it looks so much like eggs, it’s so fun. The key to making it yellow is the turmeric, so don’t leave that out (it really doesn’t add much to the taste of the dish, it’s mostly to make it nice and yellowy). Once you’ve stirred that up you can stir everything all together and let it heat up until the mushrooms and spinach have both wilted and their liquid has evaporated. Should take maybe 8-10 minutes over medium heat, which will time out nicely with your potatoes being done! 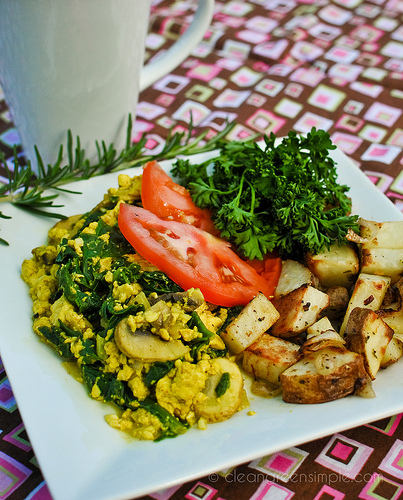 Serve with some chopped tomatoes, maybe a bit of hot sauce, some toast…unless you’re taking photos for your food blog I’d say the big hunk of parsley is largely unnecessary. But you can add it if you want to!

So, what is your favorite breakfast food? Anything you’d like me to post a recipe for a healthier (vegan, gluten free, sugar free…) version of?

Vegan, Gluten Free, Low Fat, Refined Sugar Free, Soy Free As mentioned above, you should start these before you prep your tofu scramble if you want them to finish at the same time.
Click stars below to rate, or leave a full review in the comments
1 Rating
Print Rate it Now Pin Recipe SaveSaved!
Prep Time: 10 minutes
Cook Time: 15 minutes
Total Time: 25 minutes
Author: Jessica Verma 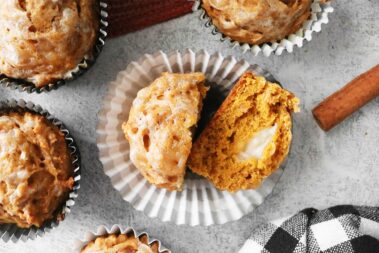 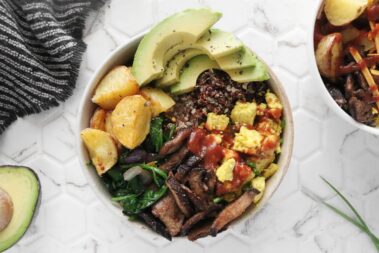 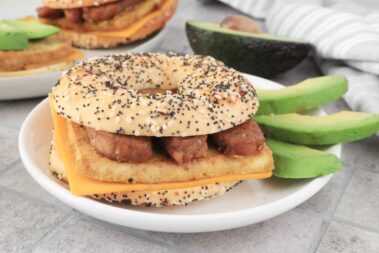