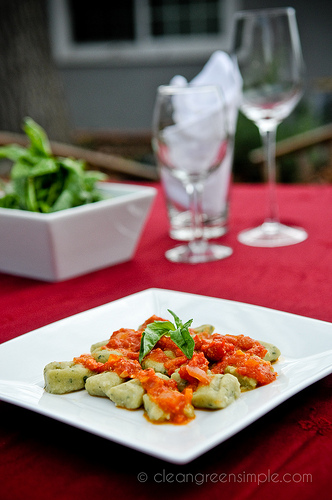 So there’s this restaurant near my house that makes an amazing ricotta gnocchi in vodka sauce. Before I was vegan, I loved this gnocchi – warm, soft little pillows of dough and creamy sauce…it was just generally awesome. Until about 10 minutes after I finished and proceeded to feel bloated and crappy for the rest of the evening, because ricotta gnocchi in pink sauce is a lot of dairy, and I don’t really process dairy very well. But I ordered it on a frequent basis anyway. Because I am absolutely terrible at learning from my mistakes where food is concerned – every time I’m convinced that this time I totally won’t feel sick after. Or I won’t eat the whole thing. Neither of which is ever true.

But now I don’t eat dairy, partially because I can’t do anything in moderation (no, seriously – I’m fine at quitting things entirely but I can’t just do a little of something. Anyone else like that?). I still remembered the comfort food deliciousness that was that gnocchi, though, so I set out to make my own vegan version. Unfortunately, most of the vegan recipes I found called for white flour, which I also try to avoid.

But then I found this amazing recipe at Manifest: Vegan. All her stuff is vegan and gluten free, which is pretty sweet, and these gnocchi did not disappoint. The only change I really made was to use amaranth flour instead of sorghum flour because my store didn’t have sorghum. I have no idea if that made much of a difference but my dough was easy to work with and the gnocchi tasted perfect. I often find working with dough to be a pain but these really came together fairly easily – and it makes a bunch so I was able to freeze some for leftovers.

To get the detailed recipe and instructions you can head on over to the link above, but I’ll give you the broad strokes here. Just boil & mash some potatoes, blend together a bunch of basil and seasonings, and mix it all together in a big bowl. You’ll end up with a big ball of dough, which you can turn out onto a clean countertop. 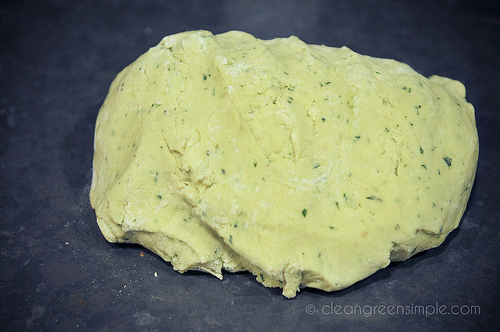 It does get more appetizing, I promise. Grab a handful of dough and roll it into a long strip about an inch wide. Press the back of a fork all along the strip to make those little gnocchi notches. 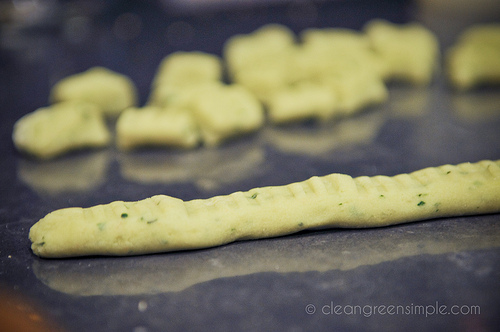 Then just cut the strip into 1 inch pieces with a butter knife to form the gnocchi. 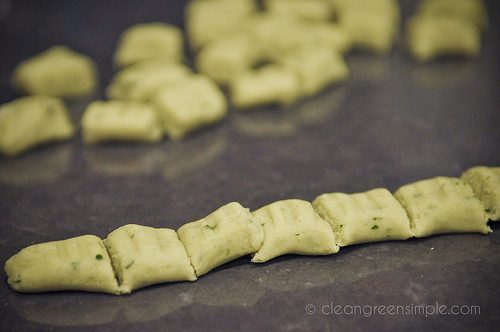 That’s all there is to it! Transfer those to a dish or tray and repeat until you’ve used up all the dough. To cook them just drop them into boiling water 10-15 at a time and wait for them to float to the top (it only takes a minute or two). Scoop them out with a slotted spoon and place them in a plate or bowl and cover with sauce. The original recipe serves them plain or with a little bit of olive oil, and since they already have basil in them they really do work very well that way. But I was trying to recreate my own little comfort dish so I went ahead and made a super easy vodka sauce (recipe below) to finish them off. 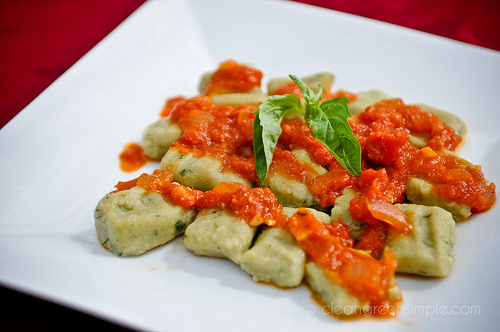 In the interest of full disclosure I should say that I did this pretty little drizzle of sauce for the photos so that I could highlight the gnocchi, but when it came time to eat them I positively doused them in sauce. It was basically tomato soup with gnocchi in it.

And in case you’re wondering, I had a big plate of this stuff and felt completely fine all evening. Amazing the difference it makes when you listen to what your body is telling you!

It is apparently a subject of debate as to whether or not vodka that is made with wheat is gluten-free – my research seems to indicate that the distillation process removes any gluten but not everyone agrees. If you are concerned about it you can skip the vodka or use a GF vodka.

If you are making this sauce with the gnocchi recipe, I recommend starting it first and letting it simmer as you prepare the gnocchi so it has a chance to thicken.

Saute garlic and onion in a medium saucepan until softened and lightly browned. Add crushed tomatoes and red pepper flakes and simmer for 10 minutes or so. Add vodka, nutritional yeast and rice milk, and simmer for about 30 minutes until it has thickened slightly. Add coconut milk, if using, and stir until heated through. Season with salt and pepper to taste. Serve on top of gnocchi or any pasta you like.