I made a lot of homemade pizza before I was vegan, and this is actually the best one I’ve ever made, cheese or not. Try this incredibly good gluten-free, vegan pizza tonight!

You guys! This gluten-free vegan recipe earned me the highest of all cooking honors: my husband took one bite and said “Holy crap!”

Now, Andrew enjoys my cooking and compliments me on it regularly, but it really takes something special to earn profanity. And this pizza was something special. It’s a good thing I have a blog I like to make new recipes for, because if I didn’t I’d probably be eating this pizza every night for the next week or two.

Vegan pizza is one of those elusive goals – it’s so hard to get it just right. With the commercial fake cheeses you can get close, but personally I notice a slightly off taste, and I don’t really like to eat fake cheese. With other replacements (no cheese, mashed beans, etc.) there’s a nice pizza-esque quality but you’re not fooling anyone into thinking they are eating real pizza.

I’m not saying this is the perfect pizza either, but in my opinion it’s the closest I’ve had. I made a lot of homemade pizza before I was vegan, and this is actually the best one I’ve ever made, cheese or not. It’s even gluten free, so that old argument kids like to make about pizza being health food (“It’s got all the food groups, mom!”) is getting closer to being reality. 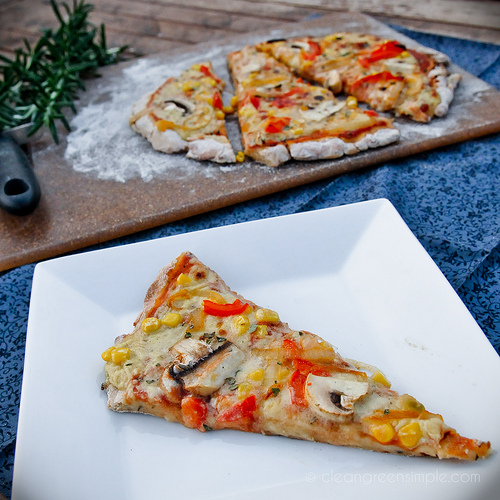 So without further ado, let’s make some pizza! First you want to make your dough. This dough is awesome because it’s really hard to screw up. Even though it has yeast in it, don’t be afraid – it’s not persnickety at all, you don’t even have to worry about letting it rise for more than a few minutes. Combine some yeast with some warm water and stir until it’s creamy. In a large bowl combine flours, flaxseed, herbs, and salt. Make a well in the middle and pour in your yeast mixture, apple cider vinegar, and some agave nectar. Combine. You should end up with a ball of dough like so: 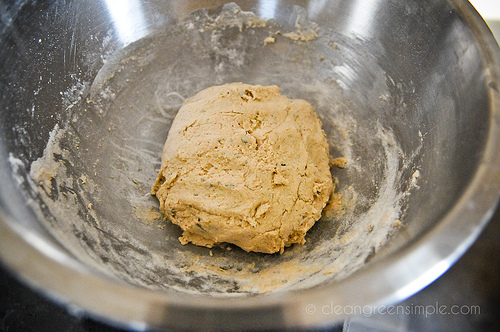 That’s actually enough dough for one large or two small pizzas – it looks small because that’s a huge bowl. You are under no obligation to use a huge bowl, I simply chose it for the same reason I make most of my dish-based decisions: everything else was dirty.

Now cover that bowl with a dishtowel and set it aside. You can put it somewhere warm, like near the oven, but I just left mine on the counter and it was fine. Now you can make your pizza sauce, which is also super easy. Just mix together some crushed tomatoes, herbs, and minced garlic. You don’t even need to heat it. 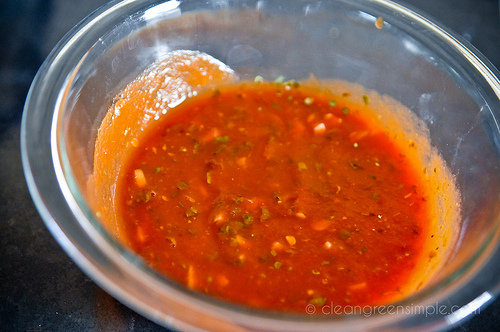 And now for the cheese! I used the “Melty White Cheez” recipe from The Ultimate Uncheese Cookbook. Just blend the ingredients together in the food processor and you’ll have a nice smooth white mixture: 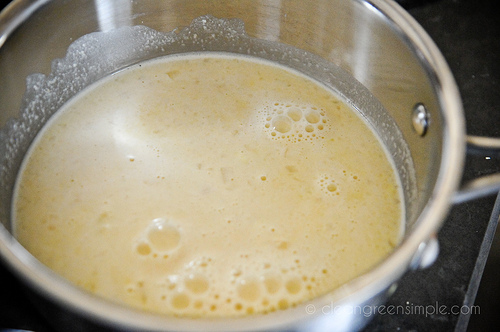 While that heats you get to bake your dough. I always prefer to make individual sized pizzas, because they are easier to work with and everyone can customize their toppings. So in this case I split my dough in half and rolled one half out on a floured cutting board. And I mean well floured – like a handful at least. Don’t skimp here, it’ll make your whole experience much easier if you use enough flour that the dough can still easily slide around the cutting board. 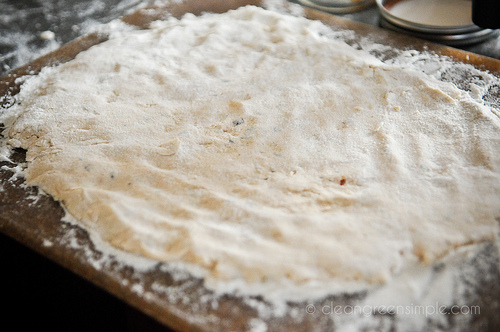 Now here’s my fun homemade pizza trick: cook it under the broiler on a cast iron skillet. Just take a 12″ cast iron skillet and flip it upside down and stick it under your broiler. Let it heat up in there for at least 10-15 minutes (I just let it heat up while I make the dough and stuff). Once your dough is rolled out, just slide it onto the preheated upside down skillet and let it cook for a minute or two. Literally – this method cooks your pizza very quickly so keep an eye on it. 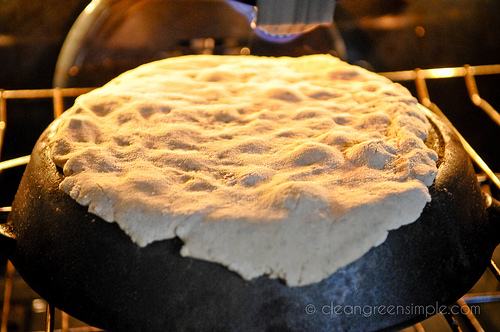 You don’t have to use this method – you can always just bake your dough on a pizza stone or a cookie sheet, but this method is fast and it gets you that lovely browned crust like in a restaurant: 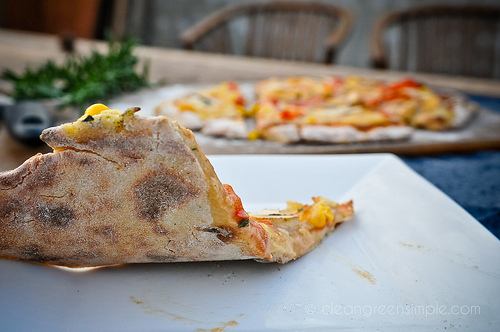 There’s a whole science to cooking pizza dough that I haven’t thoroughly studied, but I know this technique works better than any other I’ve tried and a cast iron skillet is cheaper and more multi-purpose than a pizza stone, so I go with it.

So now you’ve pre-cooked your dough, so lets add the toppings! Spread on a layer of sauce (about half of it): 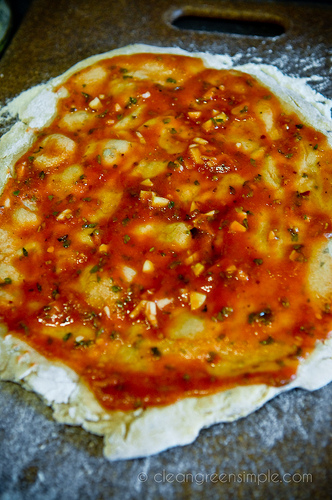 Then pour on your “cheese” – it may seem a little liquidy but it will thicken up when you bake it. I used a gravy boat to pour it on in an even layer, but you could use any spouted cup or even just spoon it on from the pan. 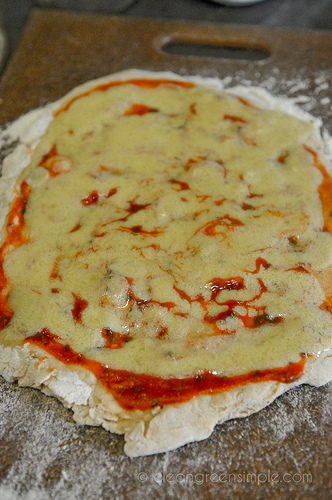 Then add your toppings. I went with grilled onions, red bell pepper, sliced mushrooms and frozen corn, but of course you can use whatever you want – if you don’t know what you like on your pizza by now I don’t think I can help you! 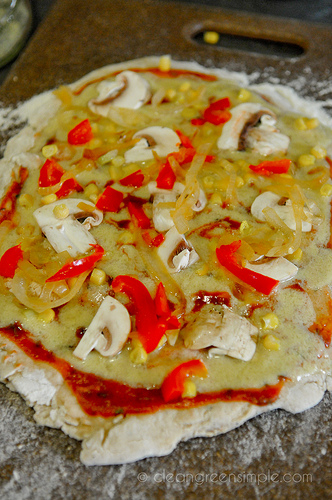 Then slide that back onto your skillet and bake it for maybe 3 minutes or so, until the cheese is just starting to brown. 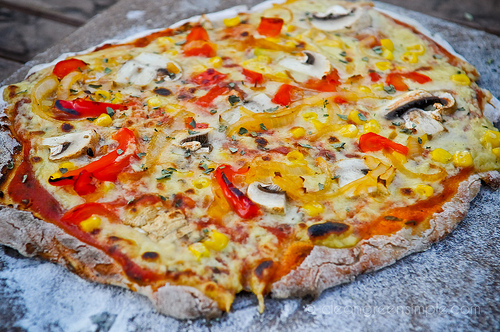 Repeat the process with the other half of the dough and toppings and you’re all set! Since the pizza cooks so fast, you can really get 2-4 cooked before the first one is too cold.

I went with a sort of sloppy shape but there’s no reason you can’t make a nice clean little circle and cut it like a regular pizza, the dough is easy to work with. 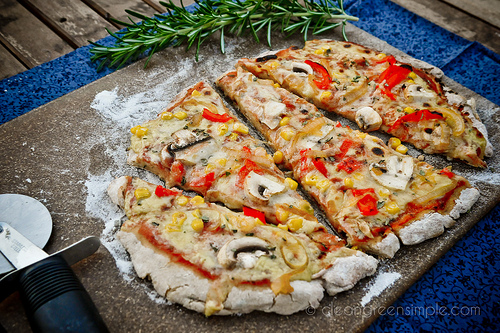 This recipe makes enough for two 8-12" pizzas or one 14" pizza. I include instructions for a mixed veggie topping below, but you can of course use whatever toppings you'd like. This looks like a complicated recipe but it really is pretty easy, especially once you get used to it. Before you prep your ingredients, put your skillet (or pizza stone or whatever) under the broiler and start preheating it at the highest temperature it will go.
Click stars below to rate, or leave a full review in the comments
4.85 from 19 votes
Print Rate it Now Pin Recipe
Course: Main Course
Cuisine: Italian
Servings: 2
Author: Jessica Verma