Greek yogurt is a creamier, healthier version of traditional yogurt, but is it vegan? That answer plus some of our favorite plant-based Greek-style brands and our homemade Greek yogurt recipe, right here. 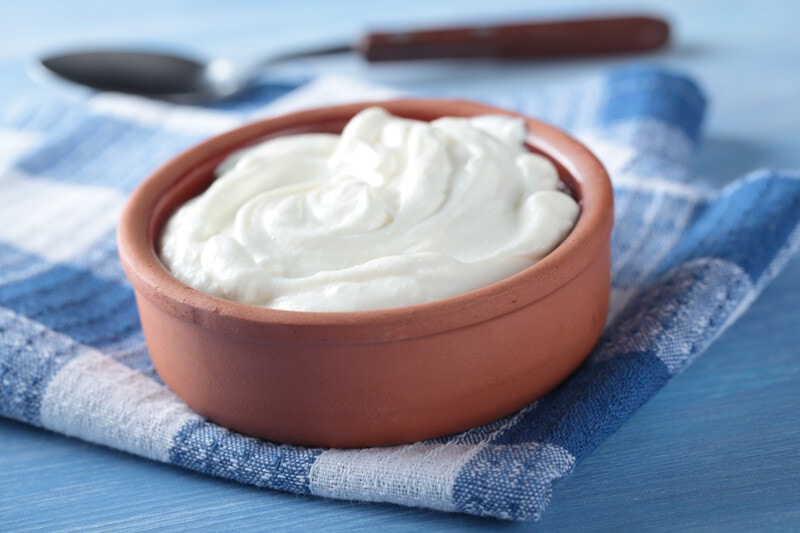 For those who know their yogurts, the difference between regular and Greek yogurt is apparent not just in texture, but also in taste. These differences, along with variations in nutritional makeup, have many opting for Greek yogurt over the lower priced alternatives.

If you’ve recently switched to a plant-based diet or are a long-time vegan with a tangy yogurt craving, you may be wondering, is Greek yogurt vegan?

The short answer is no, but don’t stop reading here. Below, we’ll tell you everything you need to know about Greek ‘gurt. Plus, we’ll give you the best vegan substitutes to use in a pinch, our recommendations for the best Greek-style vegan yogurt brands, and our exclusive homemade vegan Greek yogurt recipe.

What is Greek Yogurt?

Like regular yogurt, all Greek versions start out with three simple ingredients: fresh milk, Streptococcus thermophilus, and Lactobacillus bulgaricus. After the milk has been heated, these two bacteria cultures quickly get to work on breaking down the sugary lactose in the milk and turning it into tangy lactic acid.

For regular yogurt, the final product is achieved as soon as the desired amount of tanginess is reached. But Greek yogurt still has one important step to go.

To attain that thick texture Greek ‘gurt is known for, the product must first be strained to remove liquid. Traditionally, this was done using fine mesh cloth. Today, most commercial Greek yogurt is made using centrifuges.

By removing the liquid, or whey, the remaining yogurt is much thicker. This results in a more nutrient-dense food with a tangier flavor. Greek yogurt also tends to be more expensive than regular because it takes more milk to create the same amount of final product.

No, Greek yogurt is not vegan. The base ingredients for this product are cow’s milk (or traditionally with sheep’s milk in Greece) and probiotics. While it is true that Greek yogurt has less lactose in it than most dairy products, it still requires animal ingredients to make and therefore is not vegan friendly. It is, however, a good choice for those following a vegetarian diet.

That said, like many other traditionally non-vegan foods, there are many options for Greek-style plant-based yogurts nowadays. These Greek ‘gurt varieties are typically made with coconut, almond, or oat milk and include added ingredients like pea protein and thickeners to emulate the nutritional profile and texture of true Greek.

Compared to plain yogurt, this type is a great source of protein. Greek yogurt also has fewer carbs and less sugar, since much of the lactose is separated out during the filtering stage. This makes it a better choice for those with diabetes and other metabolic conditions.

Like all yogurt, Greek ‘gurt contains plenty of live probiotics. Eating probiotic-containing food is key to maintaining a healthy, balanced gut biome. The gut-healthy probiotics in yogurt have been shown to protect against weight gain, inflammation, many digestive disorders, and type 2 diabetes(1).

On the downside, Greek yogurt also typically contains less calcium than regular and has more calories per serving.

While some brands are made with a focus on protein content, others use higher fat contents or thickeners to achieve that Greek texture.

For reference, here is the basic nutrition info for regular and Greek yogurt and the top two vegan Greek yogurt brands.

Best Dairy-Free Greek Yogurt Substitutes to Use in a Pinch

If you’re cooking or baking and the recipe calls for Greek yogurt, you have a few options for plant-based alternatives. In this situation, we recommend reaching for one of the options below rather than a commercial dairy-free yogurt product.

This is because commercial brands tend to have a lot of extra ingredients, like pea protein and tapioca starch, that could react unfavorably with other ingredients in the dish. Also, many commercial products are flavored yogurts that could affect the flavor of your dish.

Whether you’re cooking up something savory or sweet, this easy vegan substitute works wonders.

Mix well and substitute at a ratio of 1:1.

This mix will be waterier than true Greek yogurt, so you may need to adjust your other liquid amounts accordingly. If the texture is important for your dish, collect the solids from the can first and mix in the remaining water a little at a time until the desired consistency is reached.

Cashew milk is another great vegan Greek yogurt option since it can be adjusted to best replicate your desired consistency.

To make raw cashew milk at home combine the following in a blender and blend until smooth:

Substitute at a rate of 1:1 in your recipe.

If you’re baking and need an animal-product-free Greek yogurt substitute, applesauce makes a surprisingly good candidate. This option has a similar texture to real Greek and a bit of that tart flavor as well.

To replace 1 cup of Greek yogurt in a recipe, add:

Applesauce does tend to bring more moisture than Greek yogurt, so you may need to adjust the liquids or oils in your recipe accordingly.

If your reason for seeking out vegan Greek yogurt is for a healthy, easy snack, then reaching for a commercial brand is a good choice.

These days, dairy-free yogurt brands are almost as easy to find as traditional, but Greek-style options are harder to come by. Here are 3 of our favorite plant-based yogurts that have that wonderful Greek texture and tang.

When it comes to replicating the essence of Greek yogurt and the nutritional profile, Kite Hill does a wonderful job.

Their Greek yogurt option is packed with protein—25 grams per serving! It has a little more fat than real Greek ‘gurt but has far fewer carbohydrates and no sugar.

You can find this variety in plain or vanilla flavors. The plain flavor is great for dressings and dips and the vanilla is perfect with a little homemade granola.

Skyr isn’t exactly Greek yogurt, but you can certainly think of it as the Icelandic version of this Middle Eastern favorite. Skyr is made using a skim milk base and skyr-specific cultures. But the product is strained the same way Greek is and, thus, has a similar texture and consistency.

Siggi’s is one of few skyr companies to offer a plant-based protein alternative. This version isn’t quite as smooth as traditional skyr, but it does offer that thick, protein-rich goodness you’d expect.

Plus, this Greek-style alternative comes in nine great flavors for more variety.

If all you’re after when it comes to vegan Greek yogurt is something that tastes as good as the real thing, you’ll love Silk Greek-Style Vegan Yogurt.

This product doesn’t have the same nutritional makeup as real Greek, but it certainly nails the flavor and texture. It’s smooth, thick, and tangy. And it’s available in four great flavors, including vanilla bean and fresh fruit.

If you want a low-calorie snack, this isn’t the Greek alternative you’re looking for. But for a filling, somewhat decadent treat, Silk has you covered.

How to Make Vegan Greek Yogurt at Home

To make vegan Greek yogurt at home, you’ll need plant-based milk, tapioca starch, and vegan yogurt culture starter, like this product by Cultures for Health. Soy milk is the best option for vegan yogurt, as it naturally develops a thick consistency. On that note, it’s important to use a milk without any preservatives. The ingredients should contain soy beans and milk — that’s it. For this recipe, we used Edensoy unsweetened soy milk. Some people have also reported success using canned coconut milk.

In terms of supplies, you’ll need a kitchen thermometer, insulated cooler, hot water bottle, sanitized jars, and cheesecloth. The kitchen thermometer is essential, as you’ll need to heat the ingredients to exact temperatures. This process will involve heating the plant-based milk, adding the mixture to jars, and then keeping them warm in an insulated cooler for at least 4 hours. Some people use a hot water bottle, while others pour hot water into the cooler. For our batch, we used both techniques to ensure the cooler stayed consistently warm.

Another option is to use a yogurt maker, which is an excellent investment if you’d like to get serious about yogurt making. However, it’s certainly not necessary, and you can still get the job done with an insulated cooler.

You can find the full recipe card, with printable instructions, at the bottom of this post.

1. In a pot or pan, combine the milk and tapioca starch. Mix until the tapioca is completely dissolved.

You can also mix the milk and tapioca starch in a blender to ensure they’re fully combined.

3. Remove from the heat and cool to 110 degree Fahrenheit. Add the starter culture and mix well.

While the mixture is cooling, prepare the insulated cooler, hot water bottle, and hot water.

4. Transfer to clean, sanitized jars. Cover and place in an insulated cooler, along with a hot water bottle. Pour water that’s been heated to 110 degrees Fahrenheit into the cooler, until it’s about ¾ of the way up the jars. Close the lid of the cooler and place a blanket on top to keep it warm.

Let the jars sit for at least 4 to 6 hours (the longer, the better). Next, chill the yogurt in the refrigerator overnight, at least 8 hours, but preferably 24 hours. Typically, vegan yogurt needs to be chilled in order to thicken.

6. Squeeze to remove most of the liquid. If it’s your first time making yogurt, try squeezing out a small amount of liquid, then repeating as desired.

7. Mix in sweeteners, flavorings, or additional ingredients, if desired. Store your homemade Greek yogurt in the refrigerator for up to 1 week. 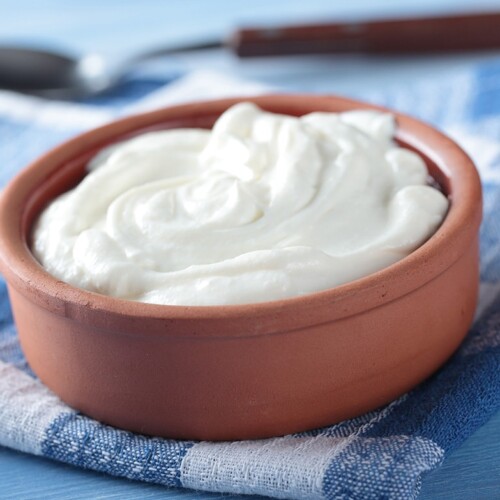 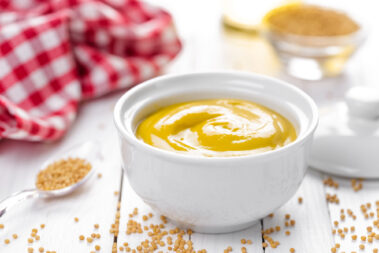 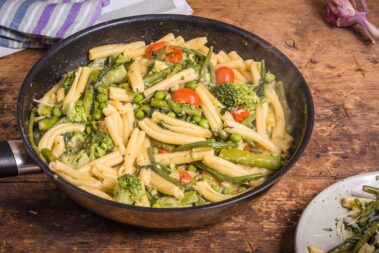 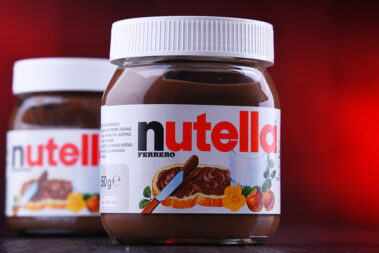 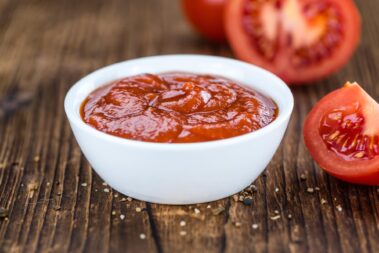 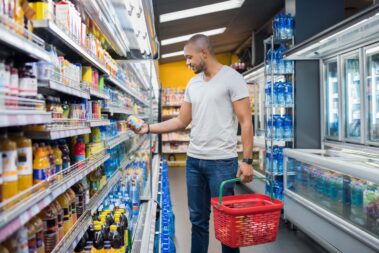 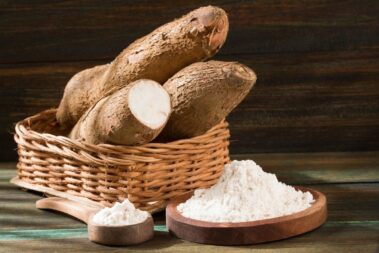