When it comes to which is better, quinoa vs rice, the answer will depend on if you’re talking about health benefits or culinary uses, and whether you are looking at white rice or brown. 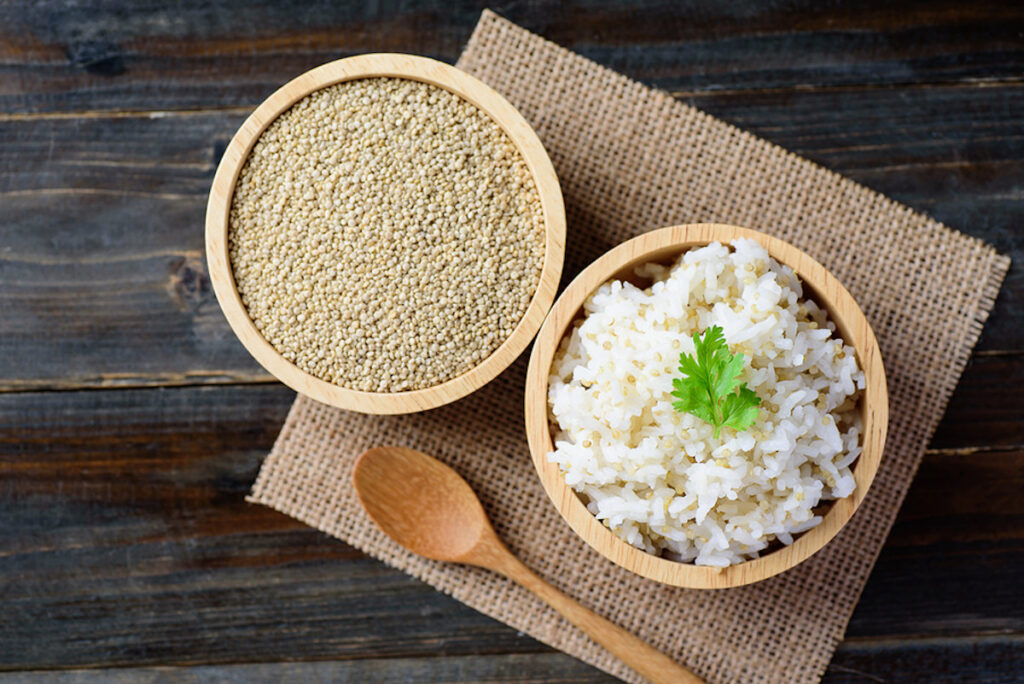 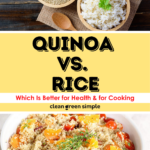 Humans have been cultivating and eating rice for over 12,000 years. Even today, this staple food is the most popular grain eaten around the world with well over 400 million metric tons consumed per year.

But just because something is well-established and popular doesn’t necessarily mean it is the best out there. And when it comes to grains, there is one item, in particular, that is constantly being celebrated for its health benefits and culinary versatility.

So what exactly is quinoa and does it really live up to the hype? Let’s take a look at this up-and-coming grain crop and see just how well it stacks up against the current king of cereals.

Called “the mother grain” by the ancient Incans, quinoa has long been celebrated by native American peoples for its taste, spiritual power, and adaptability. Despite being so highly regarded and having been around for thousands of years, this ancient food has only recently gained superfood status throughout the world.

While it is commonly considered a grain, quinoa is actually a seed from a plant closely related to beets and spinach. True gains come from grasses not plants, but nutritionally speaking, both grains and low-fat seeds can be very similar.

Here is a quick break down of quinoa’s nutritional profile per 1 cup cooked:

Because of the high fiber and protein content of quinoa, it has a relatively low glycemic index at about 53, making it a great choice for those predisposed to diabetes and those trying to lose weight. This power seed also provides all nine essential amino acids which means it is a great choice for vegans and vegetarians.

Quinoa also contains a host of minerals such as iron and antioxidants like quercetin, which has been shown to reduce inflammation and may even fight cancer.

The Drawbacks of Quinoa

Quinoa is such a powerhouse of nutrition that it can be hard to find any flaws with it from a dietary standpoint.

But, the fact that it is considered a superfood does mean this cereal grain is more expensive than others. And, unlike rice, it does require some prep by soaking or rinsing to remove the bitter outer layer of saponin before cooking.

When we talk about rice that humans have been eating for thousands of years, we are talking about brown rice–which is simply the whole-grain form of the more modern staple, white rice.

Unlike white rice, brown rice still contains the nutritious germ and bran along with the starchy center. These retained pieces not only make brown rice nutritionally dense but also give it a noticeable chewy and nutty flavor.

While brown rice and white rice both contain about the same amount of sugar and starch, brown rice brings a lot more to the table.

Here is a quick look at the nutritional profile of brown rice based on one cup cooked:

In addition to providing plenty of fiber to aid in weight loss and helping you feel full, brown rice also contains plenty of vitamins and minerals to keep your body functioning the way it should. Like Quinoa, it is also packed with anti-inflammatory, disease-fighting antioxidants, especially phenols and flavonoids, two types of antioxidants that are very good at fighting oxidative stress.

Brown rice also tends to be inexpensive and available in bulk, which makes it a great choice for those on a budget.

The Drawbacks of Brown Rice

Compared to quinoa, brown rice has less protein and slightly more starch. Brown rice is also much lower in certain amino acids, such as lysine, and isn’t technically a complete protein on its own.

As the base of just about any American Chinese food order and a great substitute for wheat in gluten-free snacks, white rice has grown in popularity over the last century and a half. This sticky and familiar cereal grain is simply what is left when you remove the chewier bran and germ from the rice seed.

While it can’t touch quinoa or even brown rice in terms of nutritional value, white rice does have a taste and texture that is hard to dislike. And, because it is a simple starch, it’s uses in the culinary world are almost endless.

While white rice in its processed natural form is relatively devoid of nutrients compared to brown rice, it rarely hits the shelves this way. In fact, most white rice you will find at the grocery store or the local Chinese food joint has been enriched with synthetic vitamins and minerals.

Here is a quick look at the nutrient profile of one cup of cooked white rice:

The bulk of the benefits of white rice have less to do with nutrition and more to do with how versatile this processed grain is.

With the bulk of the fiber removed, white rice has a creamy, soft texture that lends itself well to flours, deserts, and a wide range of savory and delicious culinary dishes. It’s this flexibility and pleasing texture that has led to more and more people opting for the processed version of this grain.

The Drawbacks of White Rice

While white rice has a relatively low amount of fat compared to brown rice and quinoa, it can actually be detrimental to weight loss and overall health given the lack of fiber and higher glycemic index. And, even enriched forms do not provide near the same amount of vitamins, minerals, and antioxidants as whole grains and seeds.

If quinoa and brown rice are both packed with nutrition, which grain is actually better? This can be a difficult determination to make when talking in broad strokes. To truly choose a winner, we need to look deeper into the various ways one might want to rate each food.

Both these tasty cereal grains are packed with their own unique profile of vitamins, minerals, and antioxidants. And both are known to aid in weight loss, reduce the frequency of certain diseases, such as diabetes, and help the body heal from within.

But, in terms of protein content and completeness, quinoa is the clear winner. Not only does it have more protein overall, but it provides all essential amino acids on its own. It also contains more fiber than brown rice, which not only aids in digestion but can help keep you feeling fuller longer.

Quinoa is also the top performer when looking at important available minerals like iron and folate. These are especially important micronutrients for women and people eating a plant-based diet.

In terms of taste, both these grains have a bit of a nutty flavor.

Quinoa is much smaller than rice and has quite a different texture. It isn’t necessarily a grain you need to chew, which can detract some from the eating experience. Brown rice, on the other hand, is more substantial and has a pleasant, chewy texture.

While both these grains tend to get mushy if overcooked, it is more difficult to overcook quinoa. But, quinoa does require rinsing before cooking to remove the natural bitter taste. If you skip this step, the result can be noticeable and unpleasant.

Both of these cereal grains can be used in a wide variety of dishes, from sweet to savory. Quinoa and brown rice are fairly interchangeable within recipes as well, though you can expect a slight texture change.

In terms of home cooking, quinoa takes much less time to prepare at about 20 minutes compared to 45 for brown rice. This can make it a better choice for weeknight dinners or last-minute meal prep.

Overall, the taste and texture of brown rice may be more familiar in traditional dishes than quinoa, but both can easily be incorporated into a wide range of meals and interchanged to put a new spin on an old classic. If you are feeling extra adventurous, you can even mix the two for a grain-based dish that is as visually pleasing as it is tasty.

When it comes to quinoa verse brown rice’s more processed cousin, white rice, there is no real contest in terms of health. But that doesn’t mean quinoa is a shoo-in to win the categories of taste and culinary use.

Here, quinoa is a clear winner. In fact, any whole grain, including brown rice, is going to knock white rice out of the park if all you are considering is nutritional value.

In addition to being relatively devoid of natural vitamins and minerals, white rice just does not bring that much to the table in terms of protein, fiber, or even healthy fat. It is made up almost entirely of simple starches that break down quickly in the gut and cause blood sugars to rise fast.

White rice is also a highly processed food as far as grains go, meaning that it is a far cry from the natural grains and seeds our digestive tracts have evolved to eat. This may be one reason why white rice is so closely linked with metabolic disorders like diabetes and weight problems.

While quinoa has a sort of nutty, almost sesame flavor, white rice tastes like pure, simple starch. It has a very mild flavor that is easily influenced by whatever other flavors are in the dish. And this is one reason it is so popular.

The texture of the two is also very different, with even al dente white rice having a smoother, squishier feel than quinoa.

It’s that very simple flavor and mutable texture that make white rice so popular in the culinary field.

If the star of the dish is meant to be the spices or another ingredient, white rice is a great supporting character since it will never overshadow the other foods in the recipe. This is very different from quinoa, which tends to attract a lot of attention, both for its taste and texture.

While both of these grains are gluten-free, the versatility of white rice when made into flour also gives it a leg up when it comes to cooking gluten and wheat-free meals.

As far as use in your own kitchen, both these foods take about the same amount of time to cook. Both are easy to prepare and store, as well.

Overall, white rice will likely always hold a place in the culinary world for its mild taste and wide-ranging uses, but quinoa is a much better substitute if your focus is on health and nutrition.

And the Winner Is…

In the end, quinoa really does live up to the hype. It is a versatile, tasty seed packed with nutrients and protein that deserves a place on your plate. But brown rice deserves an honorable mention for its own health benefits and does not need to be replaced entirely by quinoa in your pantry.

White rice, on the other hand, should find its way out of your kitchen if your goal is to eat healthier, lose weight, or just plain feel better. Or, at the very least, save it for those few special recipes where only the starchy goodness of white rice will do. 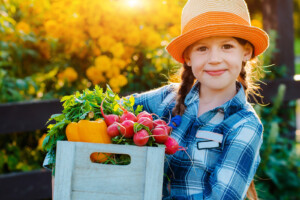 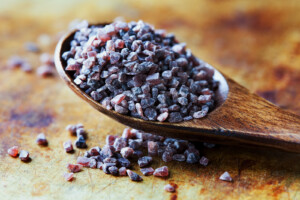 When it comes to Himalayan salts, black is the new pink. Find out what Himalayan black salt is, how it might benefit your health, and how to cook with this uniquely eggy spice. 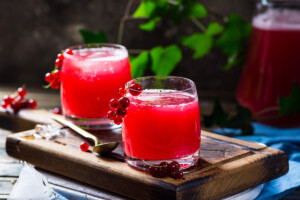 Kombucha is a tasty treat for any time of day, but getting the most of its beneficial effects requires specific timing. Find out the best time to drink kombucha for you.